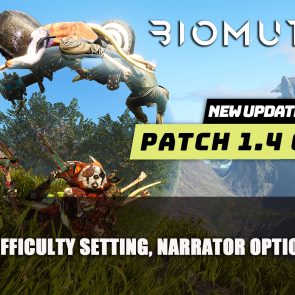 The latest patch 1.4 for Biomutant adds a few things including now an option to adjust the narrator to be completely off. Previously you could lessen the frequency of the narrator but now there are options to toggle for “Gibberish” (the language the furry creatures of Biomutant speak) and to “Narrator” allowing players to select if they want the narrator to speak or not, or opt-in for both gibberish and narrator.

The update also removes the text delay animation when either gibberish or narration is disabled. Other adjustments include changes to the tutorial area to “improve the pacing of the early parts of the game”, dialogues are now shorter. There are also “more enemies and loot to the areas”.

The patch also comes with the new “extreme” difficulty setting, meaning enemy damage and attack rate is increased upping the challenge. A new setting has been added for motion blur with a slider, a fix for the depth of the field toggle not being applied during dialogues and some adjustments to items and loot. The loot has now an increased chance to have a level closer to the player’s actual level.

Other changes include the slow-motion camera which will now be disabled for end-of-combat slow motion for short combat scenarios, adjusted angles for combat targets, adjustments to sound and rumble effects for successful parry.

This patch focuses on changes for PC, but the console patch is coming “soon” according to the official Biomutant Twitter account.

As for what’s coming in the future, according to THQ Nordic one of the most requested features so far is for the option to change the outfit of your character with already collected pieces, without affecting stats. While this feature is not currently in their plans there might be one in the future.

We do not have any plans for that yet, but it is one of the most requested features. Will forward it to the team again!

If you want a breakdown for all the features be sure to check out our video below:

Biomutant is currently available to play on Playstation 4, Xbox One, and PC via Steam, GOG, the Epic Games Store and Origin.

If you’re currently venturing across the furry creature world of Biomutant be sure to check out our latest build guides including Biomutant Melee Build Guide and Biomutant Build Guide: Dead-Eye.