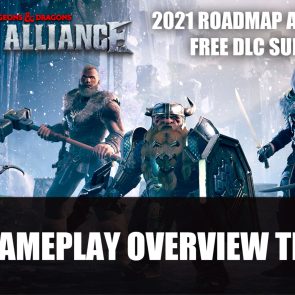 Developer Tuque Games behind upcoming Dungeons & Dragons Dark Alliance have released a new gameplay trailer ahead of its launch later this month. The developer has also announced post-launch content.

Tuque Games will be releasing their Action-RPG Dark Alliance on June 2nd. Ahead of the launch they have unveiled a new gameplay trailer narrated by the amazing Jemaine Clement who gives a colourful look at the features of the game including each playable character, combat, online co-op and the enemies players will come face to face with.

The party will contain Drizzt, Catti Brie, Wulfgar and Breuenor Battlehammer. Each of these heroes has over 50 moves and abilities to unlock, which sounds like an extensive combat system. Attacks can be chained together to unleash some powerful combos. You can dodge, parry and block, but this will reduce your stamina. Gaining an ultimate will require you to fill your ultimate meter.

As for the enemies, there are over 30 different enemy types which include goblins, and of course Beholders, which we got a preview off with the last trailer featuring the Hagedorn boss battle. The trailer also details a little about the story which follows the Crystal Shard which every enemy wants to get their hands on, ultimately teaming up to take it, and only the heroes of this story stand in the way of them doing that.

You can check out the trailer below:

The post-launch content for Dark Alliance has also been announced, with the first free DLC hitting summer 2021 which will launch alongside couch co-op. While the game launched with online co-op at launch, the split screen co-op will be coming in the summer. According to the roadmap, the first DLC will contain new levels. A second DLC will be arriving in fall 2021, adding new levels and further new difficult rankings. Also coming in fall will be the first expansion called Echoes of the Blood War, adding a new playable character, new levels and more. 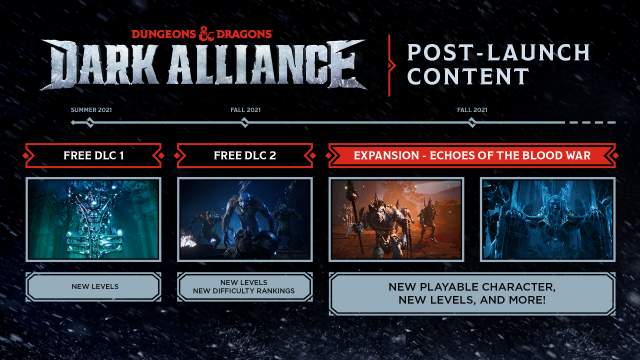 Blood War in the 5th Edition D&S is all about an endless battle between devils and demons of the Nine Hells. It will be interesting how Tuque will be implementing this hellish war in Dark Alliance.

In case you missed it, this entry for the D&D series is a reboot of the franchise, this time straying away from the top-down isometric view, putting players straight in the action with the over-the-shoulder point of view.