Solasta Crown of the Magister Leaves Early Access May 27th 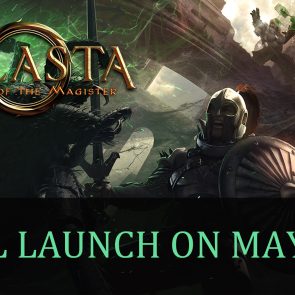 Solasta Crown of the Magister Leaves Early Access May 27th

Tactical Adventures not too long ago teased Solasta Crown of the Magister would be leaving early access soon on Steam, also sharing that the next major update 1.0 would be the full launch of the game. Now just a week later Solasta has been announced to be officially launching on May 27th.

Solasta is a team-based tactical role-playing game, with each character having a critical role in the campaign. The game is based on the Dungeon & Dragons SRD 5.1 ruleset. Players can position ranged characters on high vantage points or use their rogue to explore shafts and caverns to find out what is up ahead. There is also the use of light in Solasta, use it to explore the depths and dungeons, or utilise it as a weapon against creatures of the dark.

After a little more than 7 months in Early Access, we launch 1.0 with all the promises made during our Kickstarter. Thank you everyone for your support, you are awesome!#indiedev #gamedev #crpg pic.twitter.com/IEDvjdHt7e

Solasta was released in Early Access since October 2020, and has received regular updates, adding further features such as Dungeon Maker. This allowed players to create their own adventures by designing their own dungeons to play through. Version 1.0. will be complete with full campaign, extra side quests, a level cap of 10 (early access version currently stands at 8), Steam Workshop for sharing user-made dungeons, and a full orchestra soundtrack. There will also be post-launch support including continued updates for the Dungeon Maker and a free DLC containing the Sorcerer class.

If you were wondering whether you will need to purchase the game again if you bought the game while in Early Access, developer Tactical Adventures assured fans in their latest Steam post, you won’t need to purchase anything further, you will be prompted to update the game once patch 1.0 releases. The developer also outlined the game will roughly contain 40 hours of gameplay, which includes sidequests, but will depend on your playstyle. The level cap will also increase to level 10 as this would cause longer development time, also drawing more time and money to implement new and higher CR monsters.

As for if you will be able to continue your Early Access campaign when the game fully launches, the devs say they are trying to make sure that it is compatible with the 1.0 version. If you were hoping for further content to be added post-launch Tactical have already stated they “don’t plan on adding more content to the campaign” but will continue to work on bugs, balancing issues or “popular improvements request by the community”.

In case you missed it be sure to  check out the recent additions to Solasta in the Solasta: Crown of the Magister Spring Update.

Solasta: Crown of the Magister leaves Steam Early Access on May 27th. It is currently available on Steam priced at $39.99.

For more news be sure to check out next Outriders 1.06 Update Fixes Inventory Wipe Bug and NieR Replicant Features Cut Content & Something For “Dad NieR” Fans.