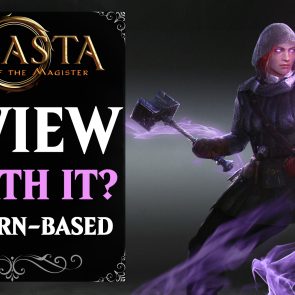 In this Solasta Crown of the Magister Review and Impressions, we’ll take a look at the new Turn-Based Tactical RPG, which is based on the Dungeons & Dragons SRD 5.1 Ruleset. This game is developed and published by Tactical Adventures and is available on PC via Steam, GOG and Xbox Game Pass. So, does Solasta live up to the expectations of tabletop D&D fans? Should you buy this on day one? We’ll answer these questions and more.

A thousand years ago before humans settled in Solasta, it used to be ruled by the High Elves of the Manacalon Empire. Peace and prosperity were prevalent in the land, until one day, the Rift opened, which drastically changed the course of their lives and the nations around them. Rumors claim that the Rift was opened by an evil god. This brought about the Cataclysm that annihilated the empire. 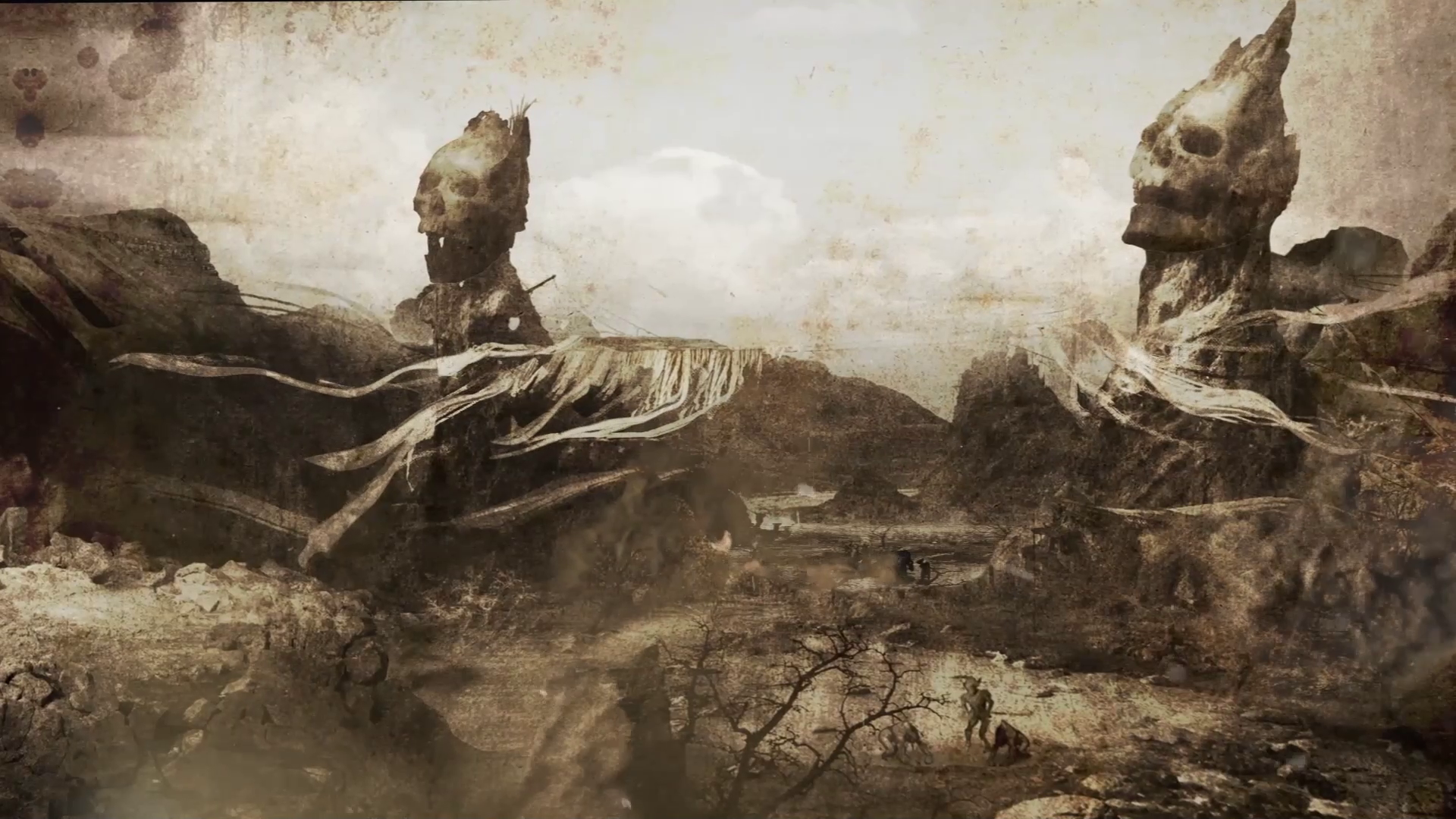 In 1024, humans built states surrounding Solasta in the hopes of venturing into the Badlands or the heart of the city and hoarding treasures left behind by the High Elves. In order to maintain law and order among multiple nations, the Legacy Council, which is an independent and unbiased organization, oversees their operations to ensure that everything is done legally and fairly. All was going well until they lost communication with one of the highest ranking officers at one of their outposts in Caer Lem. And this is where your adventure begins.

Solasta’s story is not one of the game’s strong suits. It lacks the intricate and immersive qualities that other more successful RPGs are known for, ones that are necessary to keep you captivated and invested in the game’s narrative. But probably the biggest issue, is that the plot is linear and choices don’t seem to significantly impact what will happen to you in the future.

When it comes to dialogue though, I really enjoy seeing my party members interact with one another, and you can even choose which among them will respond to NPCs since dialogue options are shared across your characters. Some lines are also delivered in a witty fashion, depending on their backgrounds and personality flags, that provide a few good laughs in between quests. 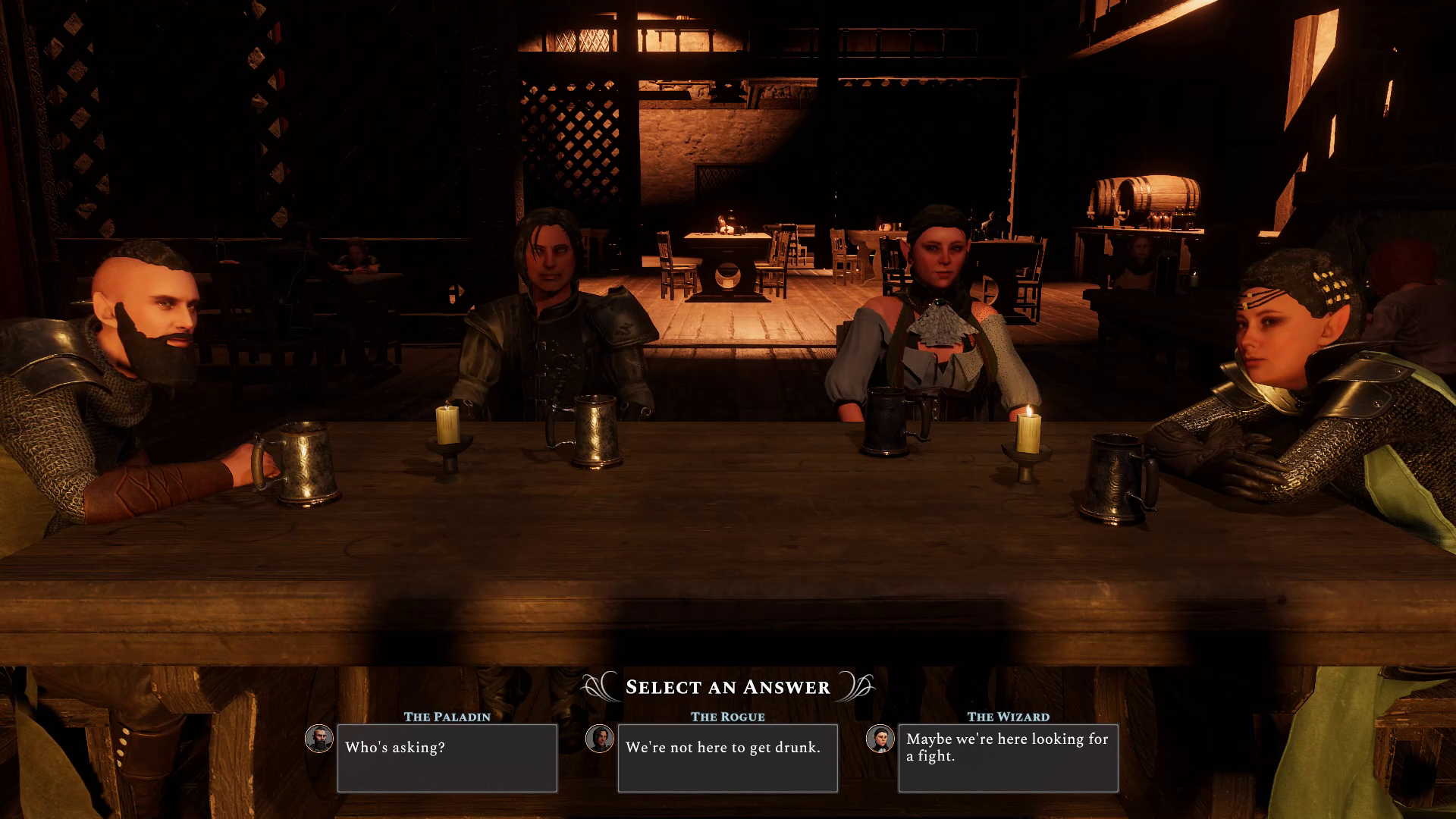 In terms of the setting, I find it fun to explore multiple castles and forests with different locales and enemies because these show how fragmented the Badlands has become. It’s probably not as deep as some other RPGs out there on this front, but it’s hard to complain given the game’s price.

Solasta Crown of the Magister is based on the SRD 5.1 Ruleset, which is a set of guidelines released by Wizards of the Coast, the official publisher of D&D related materials. This is used by developers to create homebrew content that is centered around D&D 5E mechanics. What Tactical Adventures did is they translated the core elements of this document into video game format while interweaving their own clever ideas into it.

So for instance, with Subclasses or Archetypes, they were only provided with one per Class. For Fighter and Paladin, TA retained Champion and Oath of Devotion, respectively, while creating new ones like the Mountaineer and Oath of the Motherland. The Mountaineer focuses on utilizing Shields as a way to attack enemies and to defend the party, whereas the Oath of the Motherland concentrates on dealing Fire Damage to burn their enemies to the ground. These are just a few examples of the creativity you’ll witness when you play the game.

Solasta’s Character Creation is patterned after the Player’s Handbook where you get to choose your Ancestry or Race, Class and Equipment, Background, Ability Scores, Proficiencies and Spells for ALL of your four party members.

Alternatively, you can also select from a list of pre-generated characters with their own qualities right from the get go. Every piece of information is precisely laid out to you in an intuitive manner. For example, you’ll be able to see bonuses and features of your chosen Class upon reaching certain levels. Say for the Wizard at Level 2, you can select one Subclass, may it be the Shock Arcanist, Loremaster or Greenmage with varying perks at Levels 2, 6 and 10. This is the reason why I love creating multiple characters in Solasta, so I can decide the best ways to enhance my party’s composition. 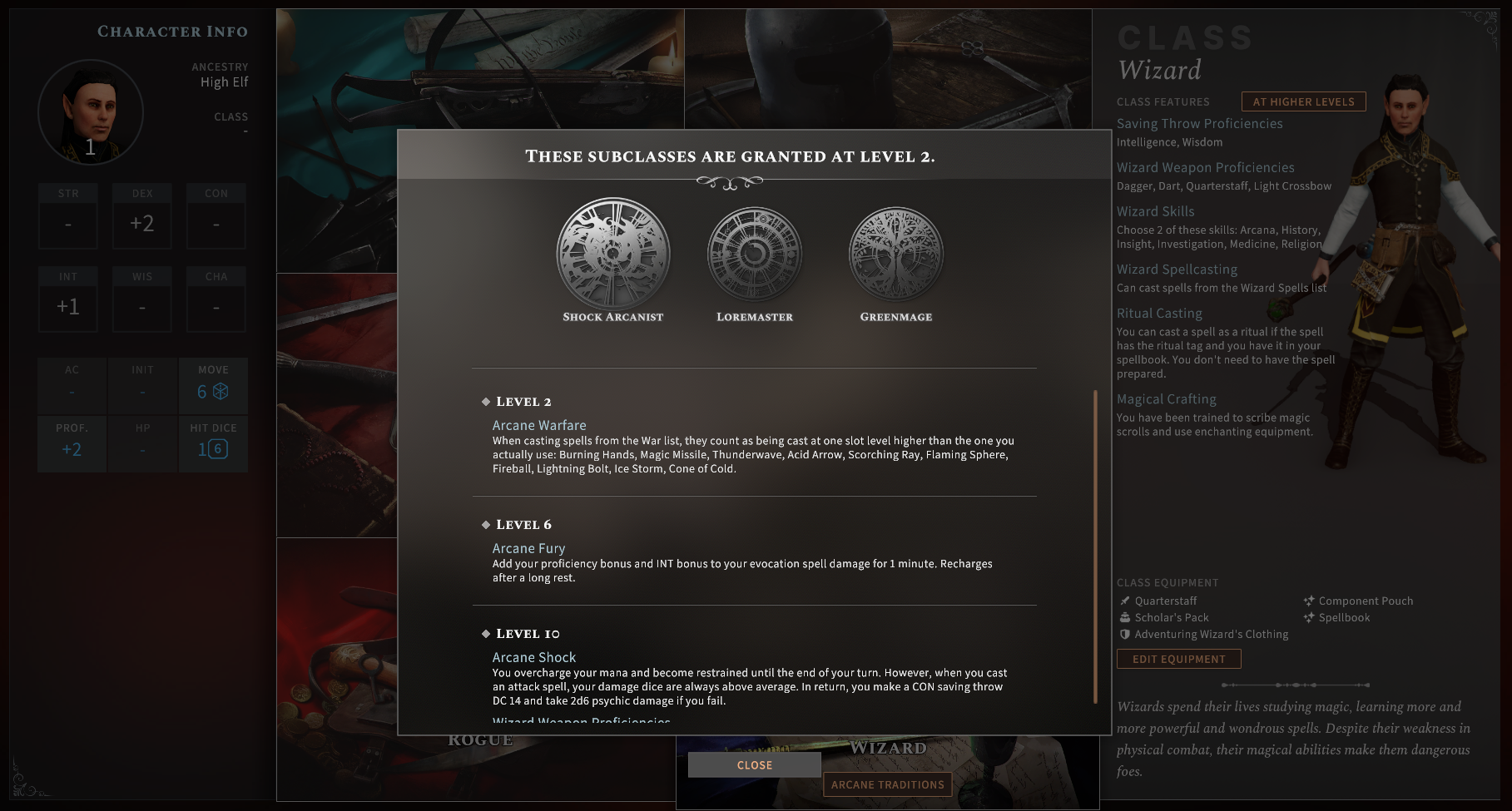 Solasta is an isometric, turn-based tactical RPG, which closely follows D&D 5E mechanics. Just like the tabletop version, you have your Main Action, Bonus Action, and Movement per turn, as well as Reactions or Attacks of Opportunities when enemies perform certain actions.

Unlike other CRPGs such as the original Baldur’s Gate series, which utilizes a real-time with pause system to pause encounters whenever you want, TA has implemented the turn-based system for Solasta, and this is one of the things that I enjoy most about the game. It plays out extremely well like the tabletop D&D that I know and love, and the turn-based system is a huge contributor to the overall sense of capturing D&D. 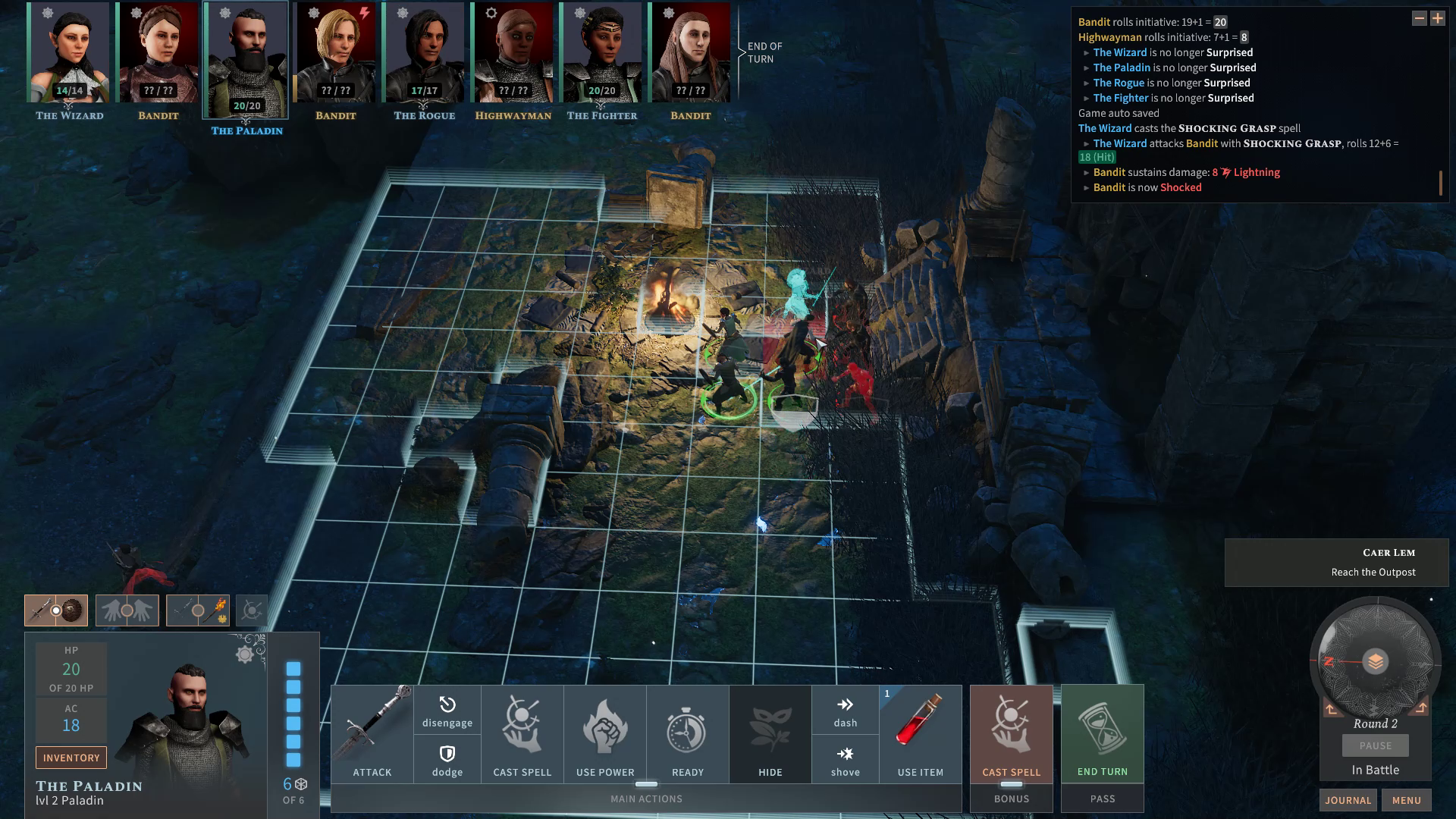 Verticality and light sources have become prominent features in past D&D based games, that make this game even more engaging than it already is. With verticality, you can plan out a series of attacks to your Advantage by taking into account the height and distance disparities between you and your enemies. The higher your party’s position is with respect to your targets, the better their line of sight will be, thereby significantly increasing the chances of dishing out successful hits. And, just like in D&D, light sources are one of the most essential aspects of every encounter because they determine whether or not you can see, and therefore hit your enemies.

Dice rolls also play an important part in how you experience Solasta because all of the rolls you make are displayed on the screen. You can even customize their appearance in the Dice Settings in order to differentiate one action and damage type from the other. Additionally, you can see the computations behind each roll and how it affects combat so it’s definitely a great way to assist players who want to maximize their character builds or to just learn more about D&D. 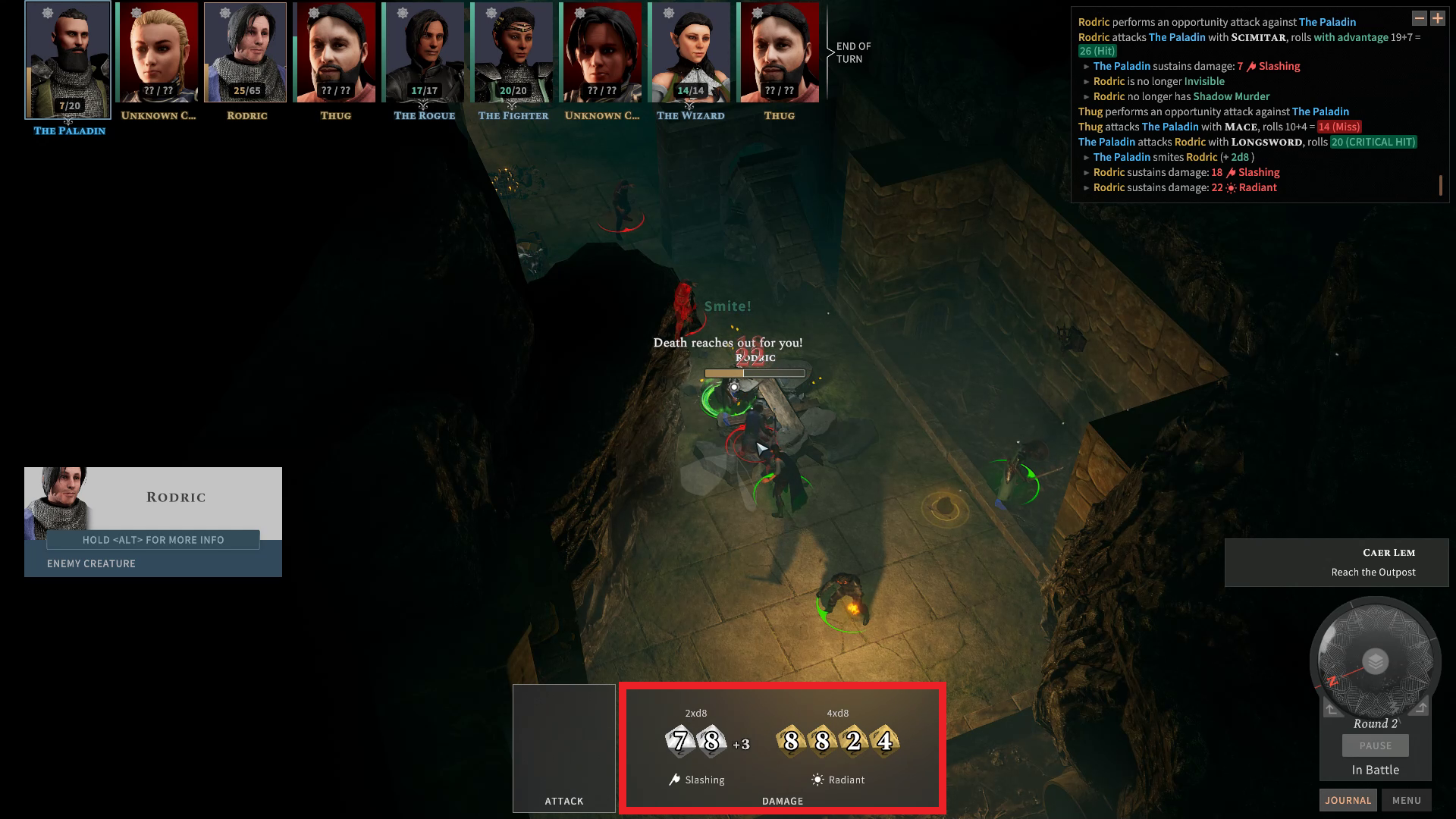 Overall, Solasta’s combat is very engaging because it lets you plan out a series of strategies per turn as you would in D&D 5E, and TA has done a great job of getting the mechanics right for newcomers and veterans alike.

In addition to the main campaign, there are side quests, which can be accessed via the Adventuring Board. This is similar to The Witcher’s Notice Board that provides you with extra work to offer assistance to the people around. Like other RPGs, you gain extra XP and better gear by completing these, and as you progress the campaign, you also meet NPCs who provide you with quests that are related to your chosen Background like the Spy or Academic. These aren’t as spectacular as I would have hoped though, as cool as they sound.

Most of the time, you’ll have to travel from one area to the next, which will require you to stock up on a ton of food. Like D&D 5E, you’ll be eating, sleeping, and taking part in random activities as a party. You can even be ambushed by or ambush questionable creatures who stand in your way to surprise them and to gain Advantage. What’s neat about this is you can see all of your party’s activities via the Travel Journal and even interrupt them if you wish to manually perform these yourself. Traveling sort of reminds me of Oregon Trail 2 in some ways, but I’m sure none of you played that game… 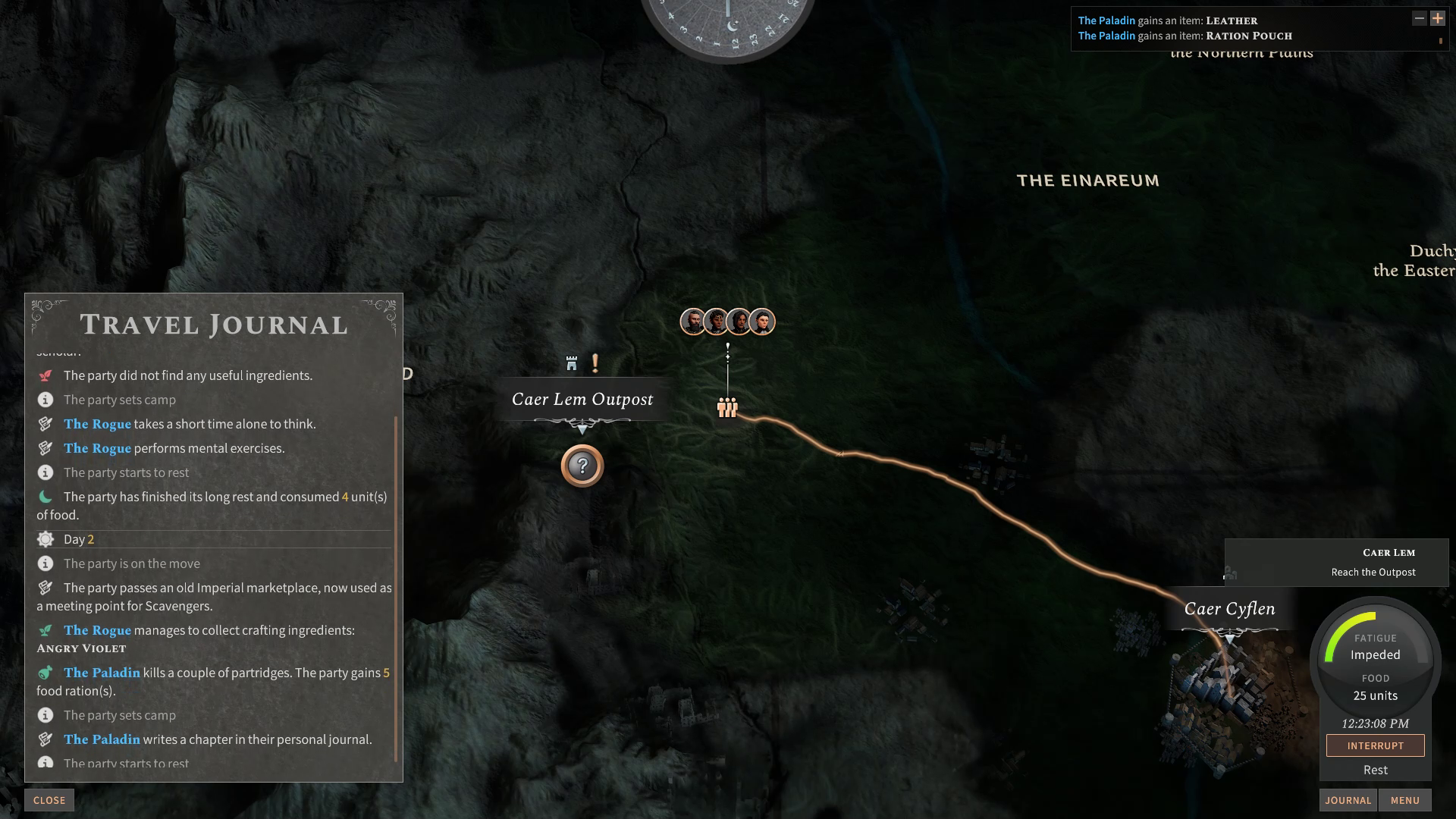 When it comes to Audio, the music is compelling such that stronger and faster beats add to the excitement and intensity of every combat, but I do wish that there was more variety to further differentiate each boss encounter.

Each action and dice roll is also accompanied by satisfying sounds, which make combat much more immersive because you can hear the weight and impact of your attacks.

The voice overs of the game are average at best most of the time, and sometimes, voices occasionally fit the characters they portray. This is definitely one of the weaker aspects of Solasta, and one that really makes it feel like an indie game.

In terms of visuals, Solasta isn’t as graphically beautiful as I would have hoped, but it’s good enough to get you through. I do appreciate how precise the space is laid out in the form of grids during combat, as this helps in clearly seeing how near or far the party is in relation to enemies instead of making assumptions.

Because of Solasta’s simple user interface, it has become very intuitive and user-friendly. I also like that you can gain additional information about objects or Spells by holding Alt if you wish to learn more about what they do, rather than being bombarded right from the start. 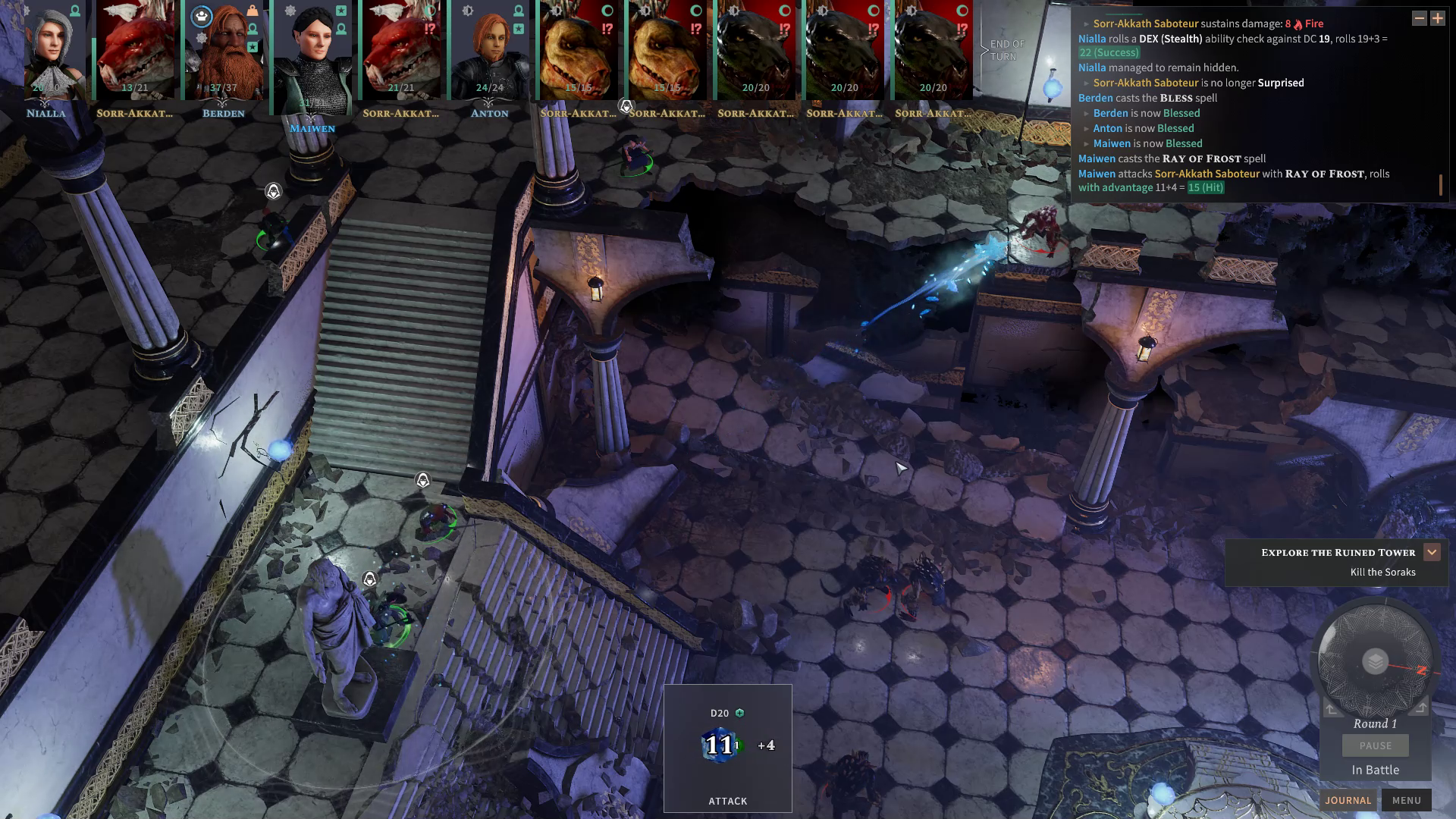 From a technical standpoint, I did not encounter any game-breaking bugs, save issues, nor framerate drops. Overall, it has been a seamless experience thus far.

Solasta will provide players with 40 hours’ worth of gameplay in a single playthrough, which can increase depending on the difficulty and the volume of completed quests. Of course, if you experiment with multiple Classes, you will exceed that number even more, which provides greater value when it comes to replayability and the $39.99 price tag.

Another reason why Solasta continues to be interesting and replayable is the Dungeon Maker. This is a custom map editor that lets you build your own dungeons, challenges and adventures, which you can share with other players. It’s like designing your own mod where you are your own Dungeon Master. Note that the Dungeon Maker continues to remain in beta even after the full launch but new features will be added in the months to come. 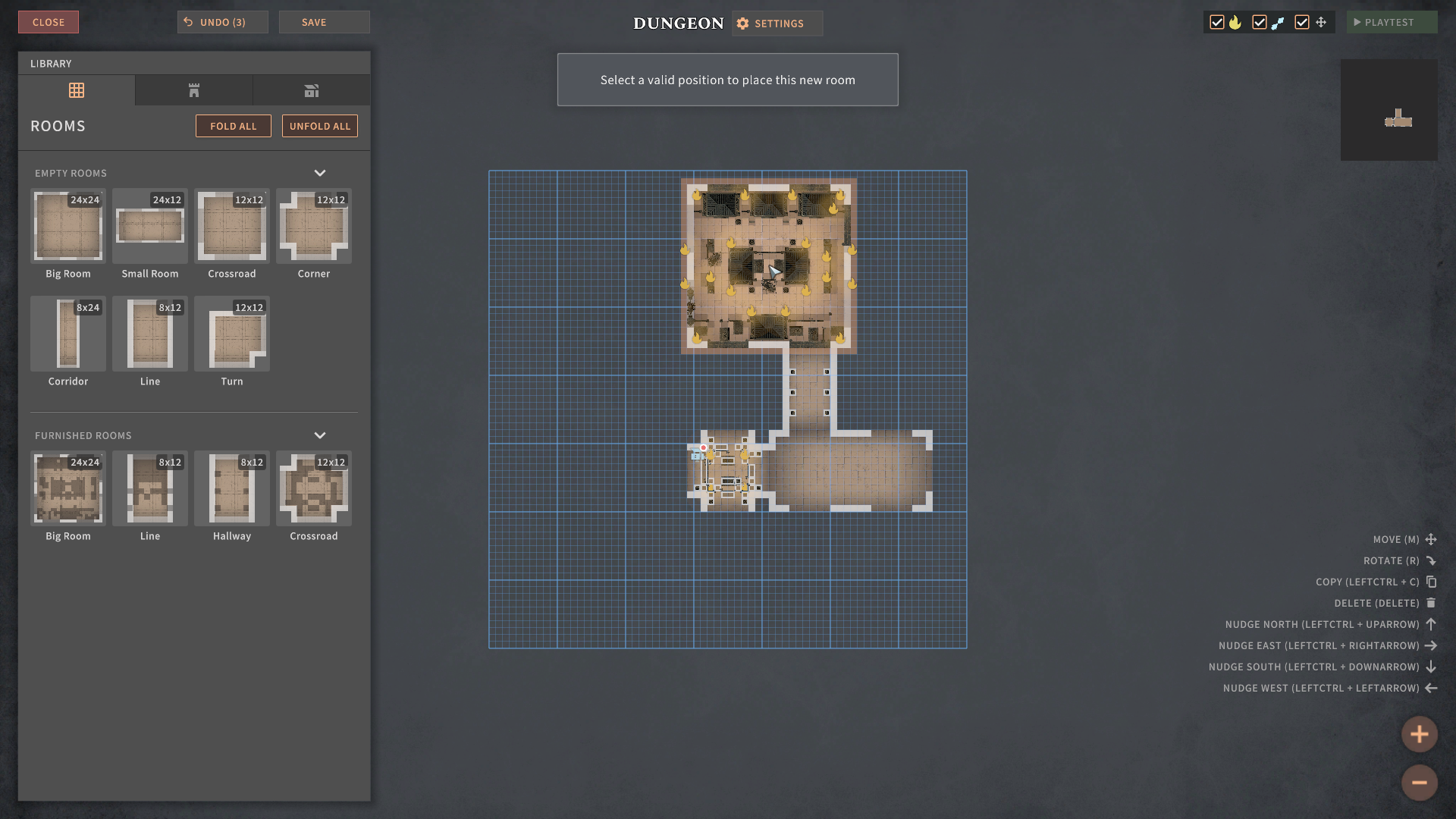 Solasta is a game that has surpassed my expectations and satiated my longing to play D&D 5E. I admit that I don’t play tabletop D&D as often as I would like nowadays, probably like many of you, but my experience with Solasta has reminded me of how fun it is to roleplay as different characters in spite of their own strengths and weaknesses. I truly miss games where you can create all characters of your party, and in doing so, completely change the way your game plays before you’ve even made it one step. It’s one of the reasons Final Fantasy 1 remains one of my favorite all time games. 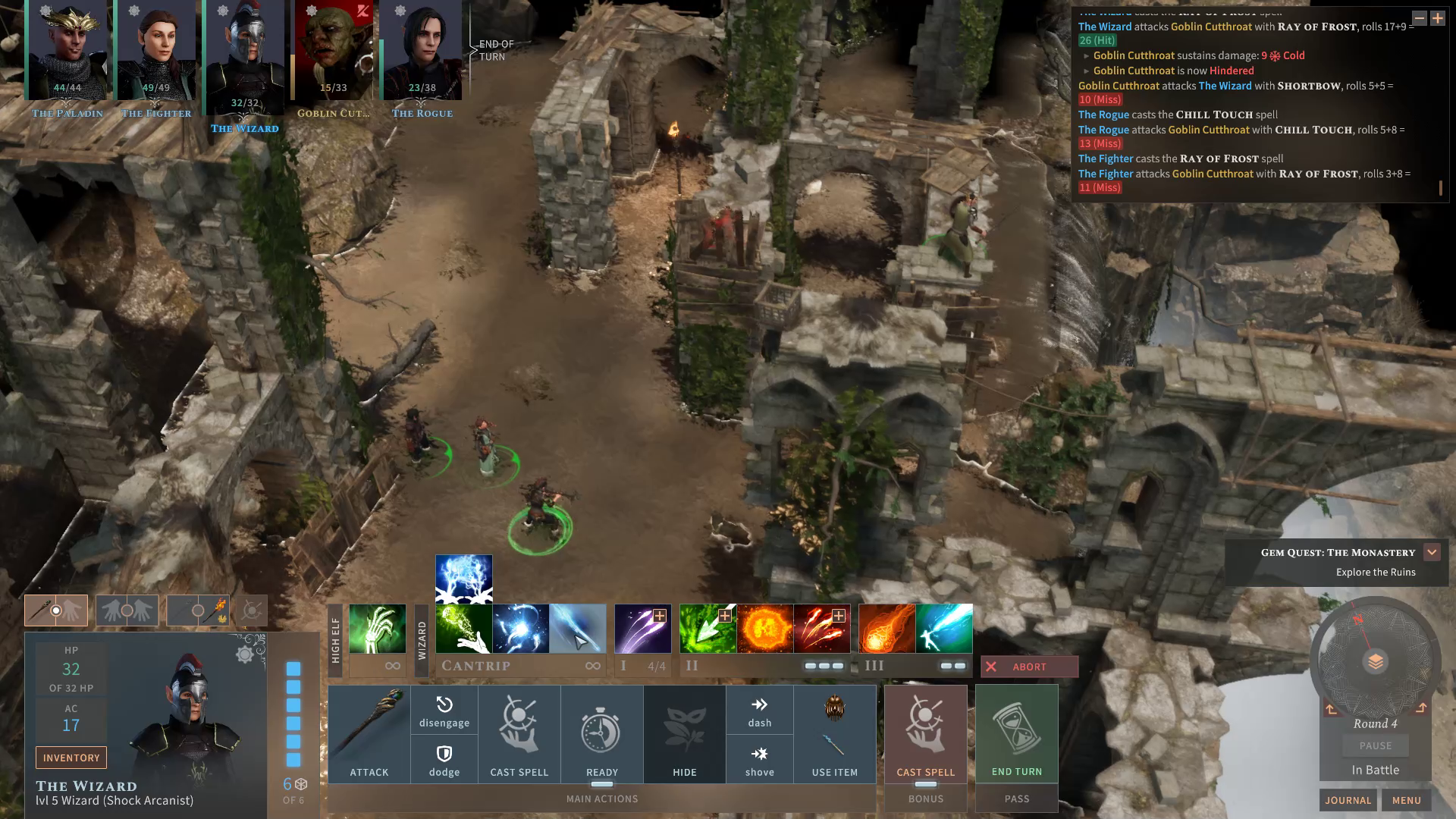 Solasta Crown of the Magister is definitely a day one purchase because not only is it an excellent way to get into D&D, if you aren’t already, it’s also a faithful adaptation of D&D 5E given how accurate the combat mechanics are depicted in the game. I can’t wait to see what DLCs Tactical Adventures come up with as well as other RPGs they develop in the years to come given how Solasta has turned out.

If you enjoyed this review be sure to check out more in Biomutant Review: Almost Amazing and Returnal Review & Impressions: PS5 Gameplay Worth Your Time, A Sci-Fi Rogue-Like As No Other.